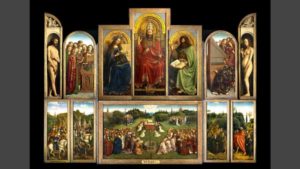 The Ghent Altarpiece, also known as The Adoration of the Mystic Lamb, is a 15th century polyptych wooden altarpiece consisting of 12 painted panels that resides in St Bavo’s Cathedral, Ghent, Belgium. Believed to have been originally painted between 1430 and 1432, it is considered one of the most important artworks in European history. Fearing the alter would be a target for the Nazis, the panels were removed from Belgium to be stored at the Vatican for safe keeping. While en route, Italy declared war as an Axis power alongside Germany, and it was instead hidden in France.

The Altarpiece was number one on Hitler’s hit list and in 1942 he stole it from France. All but one panel were found by Monuments Man Robert Posey in a salt mine in Altaussee, Austria. It was the most important piece stolen and therefore the first returned.- Photo Credit BBC